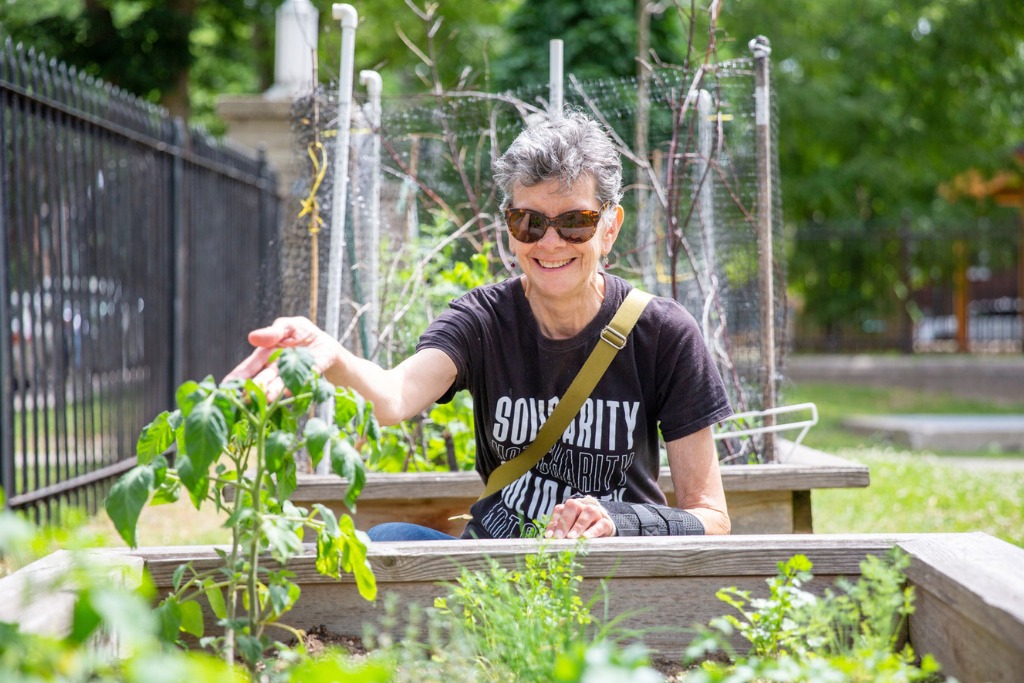 A new community garden has taken root at St. Joseph’s Health Centre, where enthusiastic volunteers cultivate herbs and vegetables to be harvested, and patients from the hospital’s withdrawal management program will be involved in caring for the green space as well. The garden, which includes 20 planting boxes, currently grows lettuce, kale, tomatoes, peppers, cucumbers and various herbs. The initiative was spearheaded by the organization Greenest City, whose mission is to build healthy and inclusive neighbourhoods. Volunteers say the garden provides a place to rest for area residents, and helps foster community. “We can learn a lot about life by taking care of plants,” said volunteer Peter Gadd.

Dr. Sean B. Rourke, scientist at the MAP Centre for Urban Health, attended the International AIDS Conference in Montreal, where he spoke on several panels and helped launch “Our Healthbox,” an interactive dispensing machine that distributes HIV, COVID self-testing kits and harm reduction supplies such as Naloxone kits and clean needles. Rourke also was emcee with federal health officials when the government announced $17.9 million in funding for HIV screening, including $8 million for self-testing kits. Congratulations on this important work!

3. Spotlight on cultural competency workshop for dietetics at St. Michael’s

St. Michael’s Hospital has made permanent a cultural competency workshop for dietetics – the first program of its kind in Ontario. The program, built by St. Michael’s dietitian Punya Ross, introduces dietitian students to the principals of cultural competency – an approach to overcoming barriers between people from different cultures. The absence of cultural competency among dietitians may perpetuate health inequities. Ross educates students about the wide cultural diversity of patients at Unity Health, and how a better understanding of their cultural diets can lead to better patient outcomes. “When you understand a client’s culture, eating habits, traditions and beliefs, it makes it easier for the client to make the necessary changes,” she said.

COVID-19 vaccination rates among Ontario’s urban Indigenous population were lower compared with the general population, despite priority rollout, finds a study led by Dr. Janet Smylie, Strategic Lead of Indigenous Wellness, Reconciliation and partnerships. The study found that between March 2020-December 2021, uptake of the two-dose COVID-19 vaccine among Indigenous people in Toronto and London, Ont., was 20 per cent lower than the overall population. Smylie told Global News that barriers in access to culturally-safe health centres, systemic racism and a lack of trust in biomedicine due to colonial policies are factors contributing to the low uptake rate.

A study led by Dr. Tara Kiran spotlighted the unique pandemic challenges for individuals experiencing homelessness and their care providers. The study, published in the CMAJ, found that individuals experiencing homelessness faced a variety of challenges, including reduced shelter capacity, public closures and lack of isolation options. The authors said that planning for future pandemics must take into account the experience of under-housed populations.

Seven projects let by St. Michael’s researchers were awarded more than $4.8 million in funding from CIHR. The funded projects look at a range of issues, such as identifying racial disparities and inequities in cancer genetics services, investigating clinical outcomes among people who inject drugs during a period of rapid program and policy changes, and studying how blocking a key protein in chronic kidney disease may contribute to treatment. Congratulations to all of the investigators and their teams. Well done!

Dr. Darrell Tan spoke to Metro Morning about the response of the LGBTQ community to the monkeypox outbreak. Tan said community engagement and advocacy is critical to shaping effective public health responses. “There’s a refrain that’s often echoed that says, ‘Nothing about us, without us,’” he said.

8. Dr. Doug Campbell answers questions about the COVID vaccine for kids under five

Dr. Doug Campbell, deputy chief of pediatrics at St. Michael’s Hospital, spoke to The Toronto Star about the COVID-19 vaccine for kids under five. Campbell answered questions about the Moderna vaccine’s safety and efficacy, and why it’s important to vaccinate this age group. “One of the reasons to do it is to prevent spread, in and amongst families, another reason would be to actually prevent severe hospitalization and disease in kids themselves,” said Campbell.

In an interview with The Toronto Star, Drs. Shazeen Suleman, Ritika Goel, and Irfan Dhalla praised a temporary program that allowed uninsured patients to access care. Suleman said conditions such as asthma and other chronic illnesses would benefit from consistent physician monitoring, and would mean families don’t have to go to the hospital in times of crises.

Dr. Sean B. Rourke, Map Health scientist, co-wrote an op-ed in The Globe and Mail on Canada’s failure to adequately diagnose and treat HIV. Rourke and the other authors called on the federal and provincial governments to expand testing and treatment, with a focus on reaching key patient populations. They also called for the creation of a task force to oversee policy implementation and the establishment of tracking metrics. “Having HIV is no longer a death sentence, but people who are infected need to be tested and have access to treatment that will suppress the virus,” the authors said. “We have all of the tools and knowledge we need to correct these shortcomings.”

Unity Health Toronto @UnityHealthTO - August 9
Healthy kids who are underweight in this first two years of life continue to have below average BMI and height thro… twitter.com/i/web/status/1…

Unity Health Toronto @UnityHealthTO - August 8
'I worry a lot about how much more our health system can give.' We spoke with @DrFahadRazak, head of… twitter.com/i/web/status/1…

Unity Health Toronto @UnityHealthTO - August 5
Have a health issue and not sure what to do? The Toronto Virtual Emergency Department is available 7 days a week to… twitter.com/i/web/status/1…