Dr. Darren Yuen’s #OneBurningQuestion: How do we treat the most common issue in kidney disease? 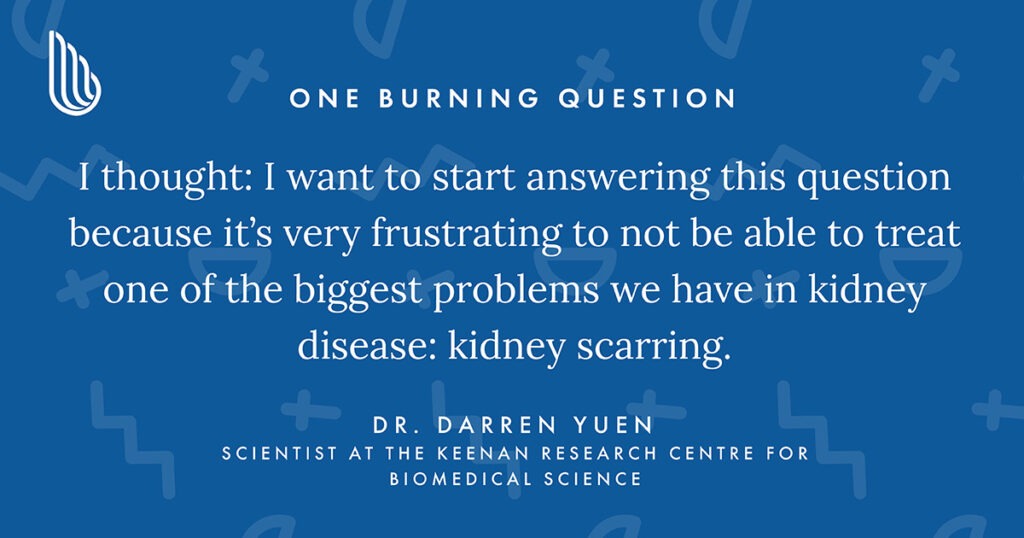 As a kidney doctor-in-training, Dr. Darren Yuen would meet with nephrologists and pathologists weekly to review kidney tissue samples from patients. His mentors always asked him what he noticed.

“You were never wrong to say there’s scarring in the kidney,” he says.

Kidney scarring, or fibrosis, is the primary cause of kidney disease. Fibrosis can impact many other organs, such as the lungs and liver, impairing their function and leading to debilitating disease. In kidneys, fibrosis can lead to kidney failure, causing patients to require transplant. Despite its ubiquity across diseased kidneys, Dr. Yuen was surprised to find that no medication was available to treat kidney scarring.

“I thought: I want to start answering this question because it’s very frustrating to not be able to treat one of the biggest problems we have in kidney disease,” he says.

Once he completed his training in nephrology in 2008, Dr. Yuen decided to pursue this area of research as a foundational scientist at the Keenan Research Centre for Biomedical Science.

Dr. Yuen and his team started a study more than five years ago by looking at 18 kidney biopsies that had been previously collected for diagnostic purposes, analyzed, and stored. They were able to tie the biopsies back to the patients’ bloodwork, follow-up care and outcomes.

They analyzed which genes had been turned on and off in the kidney biopsies and looked at how much scarring was present, and how those patients fared.

The team then looked at the ‘bad genes’ and identified which of them could be targeted to develop a new fibrosis-fighting drug. They found an enzyme called NUAK family kinase 1 (NUAK1) that fit the bill.

Transcription factors TAZ and YAP are proteins that activate key genes needed for wound healing and regeneration of organs. If these proteins are not well-controlled, they promote fibrosis. The team was able to show that NUAK1 can promote pro-fibrotic YAP activity, leading to organ scarring. They also found TAZ and YAP can further encourage NUAK1 and increase persistent fibrosis. This creates an endless loop of scarring that damages the organ.

To further prove the importance of NUAK1, Dr. Yuen’s research team used cell and lab models to inhibit or stop the work of the enzyme, which showed them that interrupting or removing NUAK1 can reduce kidney fibrosis. They replicated this in lung and liver fibrosis models, further validating their findings. The findings of this work were recently published in Science Translational Medicine.

Dr. Yuen said there is now interest from pharmaceutical companies to take these findings and create a medication to test in clinical trials. A new drug could interrupt NUAK1 to reduce scarring in tissues.

According to current estimates, 45 per cent of people in North America and Europe die of some form of fibrotic disease. Developing a drug that could fight fibrosis in the lungs, kidneys and liver – some of the organs most commonly impacted by scarring – could help patients that Dr. Yuen has been treating for most of his medical career.

Dr. Yuen personally knows many of the 18 patients whose biopsies were the foundation of this work. Now, more biopsies have been added to the database and a network has been set up to study thousands of biopsies from across the country.

Patient and Family Partners also helped inform the study, sharing with researchers which outcomes would be the most important for them, including treatment targets for kidney disease. With the help of students who have become scientists over the course of the study’s length, and a collaboration between research, nephrology and pathology, the team was able to make a discovery with important implications.

“It is nice to know that St. Michael’s patients’ biopsies have contributed not only to the management of their individual care, but are also contributing to the care of future patients so we won’t have to face the same situations in the future,” Dr. Yuen says.