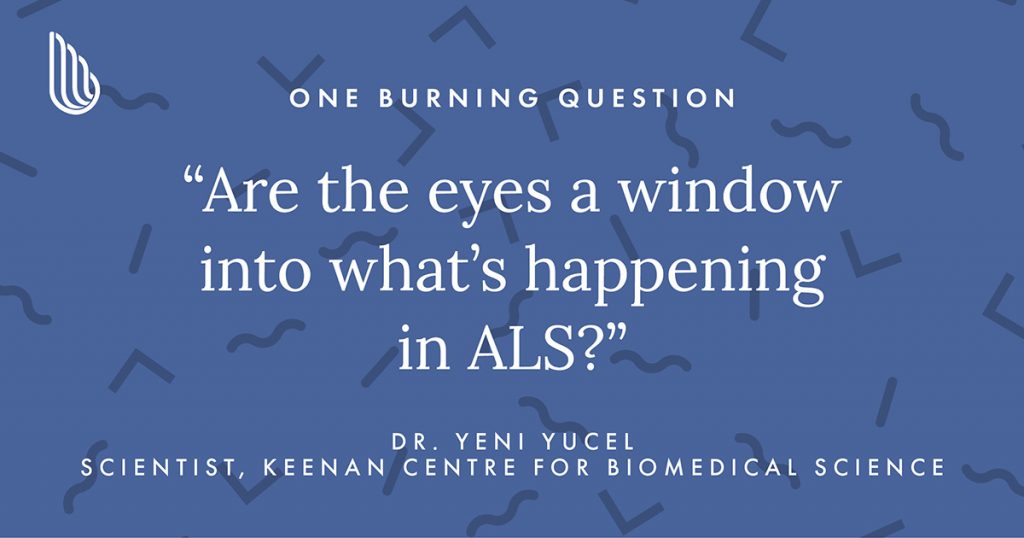 Every discovery starts with a question. For Dr. Yeni Yucel, a Neuropathologist and Scientist at the Keenan Research Centre for Biomedical Science, the eye – and in particular, the retina – is the root of his curiosity.

In collaboration with Ophthalmologist and Keenan Scientist, Dr. Neeru Gupta, Dr. Yucel’s most prominent research has uncovered mysteries about glaucoma, a blinding eye disease. But when one of his close lab mates, a scientist who introduced him to the retina and all its complicated layers, was diagnosed with amyotrophic lateral sclerosis (ALS, also called Lou Gehrig’s disease), a new interest was sparked.

“I felt powerless,” Dr. Yucel said. “My friend was a young person – dynamic and lively. A dancer and athlete. Suddenly his muscles stopped working. I thought – this disease affects motor neurons and we know the retina and optic nerve are also part of the nervous system. Is the eye a window to what is happening in ALS?”

For years, his team analyzed the post-mortem specimens of eyes from patients who had ALS and age-matched patients who did not. In a recent paper published in Investigative Ophthalmology & Visual Science, Dr. Yucel and his team shared the findings of this research project that hit close to home.

ALS typically affects people between the ages of 40 to 60 and is often sporadic, without an obvious hereditary link. Gradually, it paralyzes a person because the brain and spinal cord stop communicating with muscles. Muscles that enable walking, talking and breathing eventually lose function. There is no cure. There are treatments that lengthen life by months.

Many clinical trials are investigating treatments. The pursuit for biomarkers in the body to diagnose the disease early on continues. That’s where Dr. Yucel hoped he could contribute – perhaps the eyes could reveal information about whether a person had ALS, and how far along it was. ­

Motor neurons in the body affected by ALS have long fibres from the brain and spinal cord to the muscles. The eye has similar cells with long fibres connecting the retina to the brain. That’s where they started.

“We found the machinery of these fibres – called axons – breaks down,” Dr. Yucel said.

In examining the retinas of patients with ALS, Dr. Yucel’s team uncovered that the axons were dilated. His team also looked inside these enlarged fibres and found they contained neurofilaments, which are specific building block proteins that have also been detected in the blood of people with ALS.

“We were able to demonstrate the pathology, the behaviour of this disease in the eye,” he said. “This could be used to catch ALS through the eye early or identify disease progression.”

Eighty per cent of people with ALS die within three years of diagnosis. Remembering their friend, who passed away almost eight years ago, kept Dr. Yucel and Dr. Gupta motivated to continue this work.

“By simply looking into the eyes of patients with ALS, we have an unprecedented opportunity to assess and monitor the disease rapidly and inexpensively,” Dr. Gupta said.

Now that this study has identified a telltale signature in the eyes of ALS patients after they have passed, future eye imaging studies are planned in ALS patients to understand ALS disease progression as reflected in the eye at different stages.

“I feel proud that from the gift of those who donated tissue to this research we are able to extract information that will have an impact,” Dr. Yucel said. “To me, this is a good way to remember my friend. This was a way to let go, but with a good feeling.”