Dr. Sunit Das’ #OneBurningQuestion: How can we turn deadly brain cancer into a chronic and manageable disease? 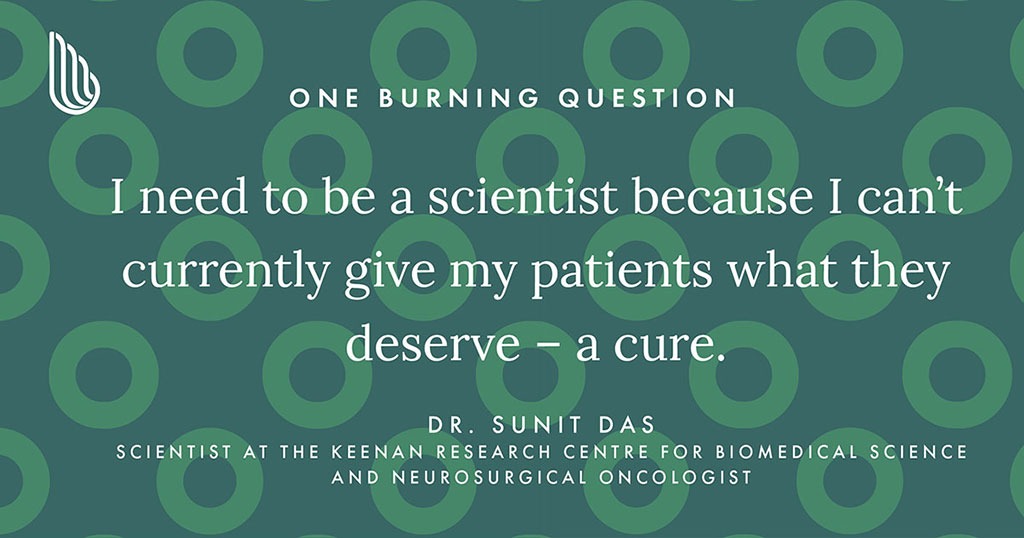 Dr. Sunit Das is a researcher because he can’t fix the patients he sees in his brain cancer clinic. As a neurosurgical oncologist, he treats patients with glioblastoma, the most common primary brain cancer in adults.

“I need to be a scientist because I can’t currently give my patients what they deserve – a cure,” he says.

Dr. Das often thinks back to medical school, when he, as a resident, would have to tell young men that the odd cancers and symptoms they were experiencing meant they had AIDS. At that time, it was a fatal diagnosis with very few medication options to prolong life.

“AIDS is now rare enough in Canada that many of our students are unfamiliar with the cancers and diseases that were part of that landscape. They may complete medical school never having seen a patient present in an AIDS-related crisis. The rare time a patient presents with an AIDS crisis they’re put on a multi-drug therapy and this horrible illness is made back into a chronic disease.”

Dr. Das’s goal with low grade cancerous gliomas, which are the early stages of glioblastoma, is to turn them into a chronic disease. To do that, he and his colleagues must research the biology of gliomas.

In a recent paper published in Nature Genetics, Dr. Das set out to understand how gliomas evolve and become more aggressive over time.

Many gliomas are biologically different from one another and the time they take to develop into aggressive cancer differs from patient to patient.

At their most evolved and aggressive form, they become glioblastoma. The disease represents 15 per cent of all primary brain tumours and is often difficult to treat. Therapy generally involves a combination of several approaches to control the disease, such as chemotherapy and radiation. Most patients die within two years of diagnosis.

With samples from 10 glioma tumours from St. Michael’s patients, Dr. Das’s recent study used a rigorous form of single-cell analysis to understand gene expression and methylation of the tumours. Gene expression is the process by which the information encoded in a gene is converted into the structures and functions of a cell. Methylation is a mechanism used by cells to control gene expression, making the genes that need to be turned off and on either available or not.

The scientists found that in low grade gliomas, the methylation has a pattern that is common to the 10 tumours. Over time, they could see methylation marks change to make cancer cells more capable of dividing, making them stronger and more resistant to treatment.

This means that there may be approaches for better understanding how a particular glioma could evolve in a patient based on these genetic patterns. It also means that scientists might be able to see how these cancer cells escape the treatments available right now.

“One thing we fear is an infinite number of things working against us – what our data tells us is that we actually only have a handful of things we need to understand.”

These changes in gliomas occur as an evolutionary process where one discreet population of cells transform the normal into the abnormal, changing the way the cells behave.

“That suggests there may be a way for us to put a foot in the door of the way that those processes are moving forward. There probably are critical switches that we can use as a way of stalling it.”

Based on this study, Dr. Das and his team have candidate processes to test out and see whether switching them off may stall the progression of disease.

At the centre of this study are the patients Dr. Das sees in clinic every week.

“I feel unbelievably lucky to be able to do what I do,” he said. “After 11 years, I still get excited before every case. I can’t wait for the time I get to spend with people during their clinic visits. I couldn’t not do this.”