FOR PATIENTS AND VISITORS: Masks and entrance screening are still required for all patients and visitors at Unity Health. Learn more about our current restrictions for visitors. 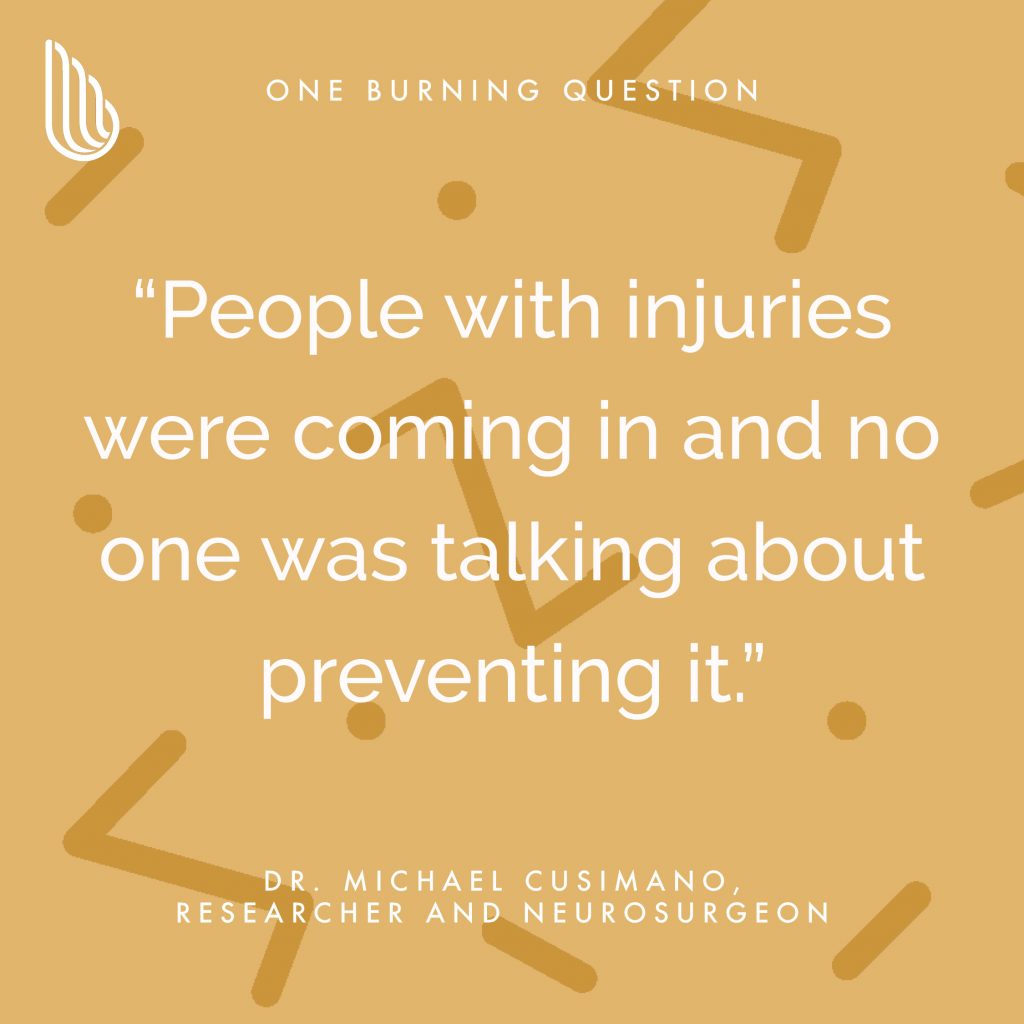 (December 10, 2020)  – Every discovery starts with a question. For Dr. Michael Cusimano, it began early in his neurosurgical career as a resident as he continued to see patients with wounded heads and bodies caused by violence, road traffic injuries, drinking and driving, falls, sports and other causes.

It rapidly became apparent: All of these injuries were preventable.

“It seemed like we were around a sink that was overflowing and everyone was on the ground mopping up the water,” he says. “No one was thinking about why the drain was plugged, or why the faucet was still open. People with injuries were continuing to come in and come in and no one was speaking about preventing it.”

For almost three decades, Dr. Cusimano has focused on research to understand ways to prevent all forms of injury. Published in prestigious journals, Dr. Cusimano’s work has made important impact on preventing brain injury. In addition to his clinical role as one of Canada’s foremost neurosurgeons, this has made him one of Canada’s leading experts on brain injury and prevention.

A recent study, published in Neurosurgical Focus, looks specifically at older adults who come to the emergency department (ED) with traumatic brain injury due to falls.

“In my practice I was seeing more and more older people with brain and spine injuries,” he says. “With this study, I wanted to see if that increase was isolated to St. Michael’s.”

Looking at data between 2002 and 2017, Dr. Cusimano found the rate of ED admissions for adults over the age of 65 who have a brain injury related to a fall has increased by 78 per cent in Ontario.

By 2030, people over 65 will account for nearly a quarter of the population. According to Dr. Cusimano, each is at risk of a fall and a preventable brain injury.

“The patient is never as good as they were before they got injured,” he said. “We save lives, yes. But if I look at it critically it’s way better if we prevent injury from happening.”

Dr. Cusimano hopes that with the knowledge generated by his latest study and others, key decision makers in health care can come together to think about how to prevent falls and the injuries that result from them. This requires a system-wide approach, such as programs to help people stay physically active into their senior years and retain fitness and balance, tailoring mobility devices to support them, and engineering solutions like redesigning stairs and spaces to prevent falls.

“This is the hard part, the part we need funding and planning for,” Dr. Cusimano said. “For this population, our study provides the foundation of knowledge we need to start thinking about how we turn the tap off.”

Unity Health Toronto @UnityHealthTO - June 30
Congratulations to @AmolAVerma for being appointed as a member of the Expert Panel on Health Data Sharing (… twitter.com/i/web/status/1…

Unity Health Toronto @UnityHealthTO - June 30
REMINDER: Toronto’s Virtual Emergency Department is a great option for Ontarians who have an urgent but not life-th… twitter.com/i/web/status/1…