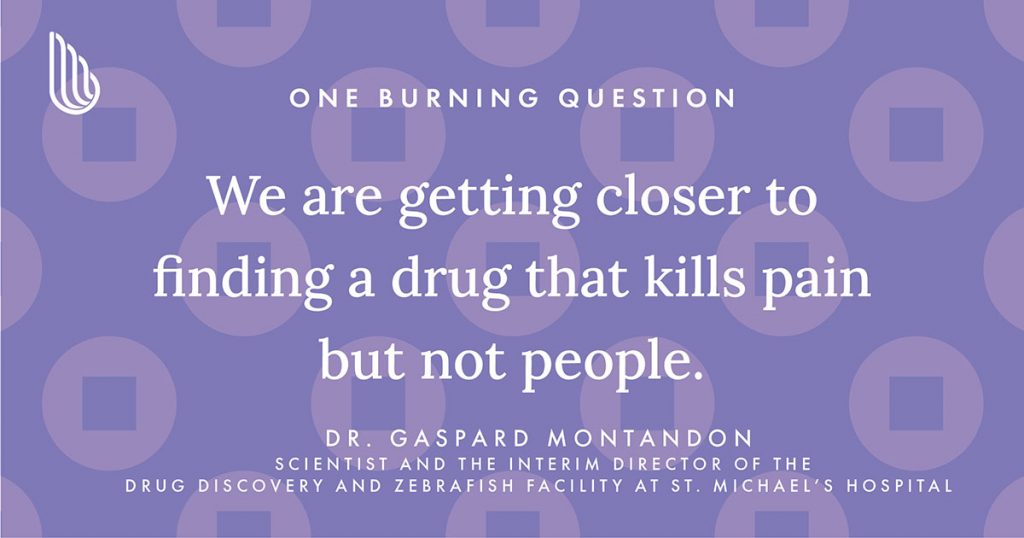 Growing up in Switzerland, Dr. Gaspard Montandon had a passion for learning about the way things worked. His curiosity and a penchant for problem solving led him to study engineering, but he quickly switched to biology when he realized the mysteries of the human body were far more interesting than machines.

“I started studying physiology to understand how to brain controls breathing,” he says. “It’s a fascinating topic that requires expertise in neuroscience but also respiratory physiology, which are very different disciplines.”

Dr. Montandon completed his PhD in Quebec City and his post-doctorate at the University of Toronto. He began studying the effects of opioid drugs a decade ago when a colleague mentioned that overdoses were one of the key problems at her hospital, but that the issue wasn’t getting the attention that it deserves.

Today, opioid overdose is one of the leading causes of accident-related death in North America, and the pandemic has exacerbated the crisis. Dr. Montandon says pre-pandemic, there were about 5,000 deaths due to opioid overdose in Canada each year, and that number spiked to 8,000 in 2020.

“The need for a solution is urgent,” he says. “Over the coming years, we will realize the damage the pandemic has done on mental health and opioid addictions. The numbers are very bad.”

“The main problem with opioid overdoses, the reason people die, is because they take too much of the drug and stop breathing,” Dr. Montandon says. “Severe respiratory distress in overdosing patients may lead to hospitalization and death. Our research’s goal is to find opioid drugs with analgesic properties but without the lethal side effects.”

As a scientist at St. Michael’s Hospital and the interim director of the Drug Discovery and Zebrafish Facility, Dr. Montandon and his team are doing drug discovery related to opioids in zebrafish. His team can quickly test multiple drugs to better understand the effects of opioids on brain and respiratory functions.

According to Dr. Montandon’s latest research paper published in the journal eLife, his team has established a drug discovery platform to quantify pain and the analgesic properties of new opioid therapies. Although zebrafish have gills instead of lungs, Dr. Montandon says they provide an excellent model for drug testing because the rhythmic movements they make to move water through their gills are similar to the movements humans make when inhaling and exhaling.

“By measuring respiratory movements in zebrafish, we can mimic opioid overdose observed in patients, and quickly test drugs without respiratory side-effects.”

Dr. Montandon and his team should be able to isolate new drugs in the coming years, thanks in part to the zebrafish, which have enabled them to accelerate drug discovery.

For Dr. Montandon, the main solution he’s after is to create a drug that reduces pain while maintaining oxygen levels in the blood and brain. He believes designing a new pain therapy with fewer side effects will reduce mortality and the number of hospital and ICU admissions overall, while making it easier for health-care providers to treat pain.

“This is a big challenge because many people don’t realize how bad it is currently and there’s still a stigma associated with drug addiction,” he says. “However, with the support of the St. Michael’s Foundation, we are getting closer to finding a drug that kills pain but not people.”