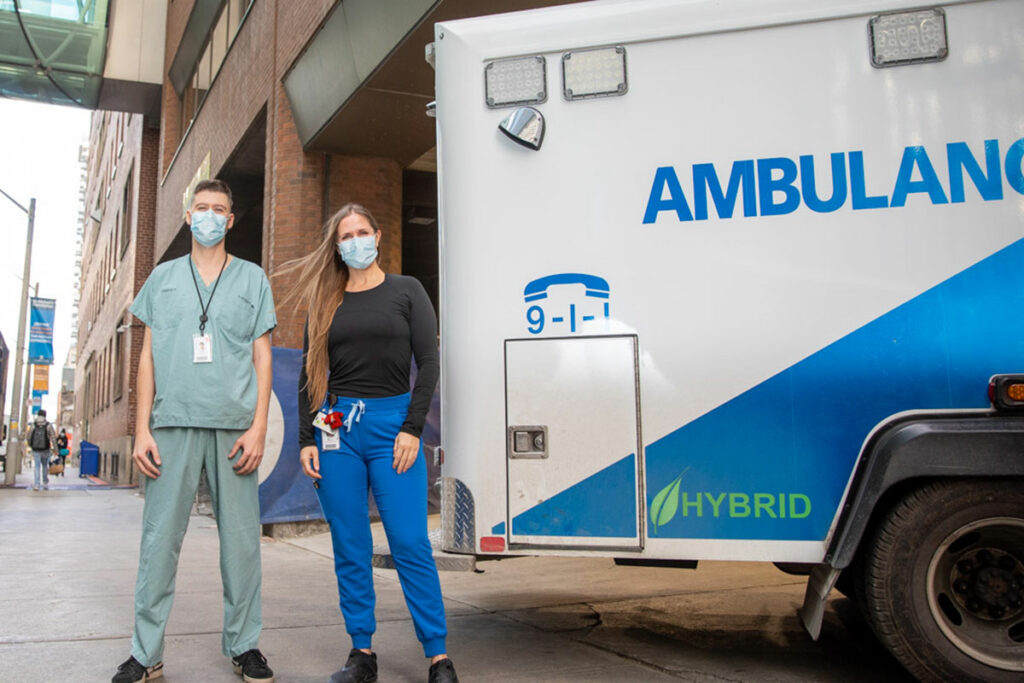 For physicians and staff in the Emergency Department, physical and verbal abuse is a reality of the job.

A 2017 study of Ontario Council of Hospital Union members found 68 per cent of frontline staff said they had been physically assaulted in the past 12 months – with 86 per cent having experienced verbal violence in the same period. And more anecdotal reports and surveys suggest the pandemic has exacerbated the problem.

“Violence has always been present in our work, but I feel it has gotten progressively worse,” says Kerri, who works as a nurse in the St. Michael’s Hospital ED and asked to be identified by her first name. “COVID-19 has increased people’s stress level. What we’re seeing now is that stress becoming overwhelming – and a visit to the ED is often the breaking point.”

A year ago, in the midst of wave two, the team in the St. Michael’s ED had reached a crossroads. “Between what we knew was statistically true about workplace violence in the ED and what we had anecdotally or personally experienced, there was a sense that enough was enough and we needed to take control of this situation and act on it,” says Justin Logan, a physician in the ED.

Logan and Kerri are members of the St. Michael’s ED Safety Committee, which brings together nurses, physicians, security personnel and other members of the ED team to improve safety in the department.  Over the past year they and their colleagues on the committee have developed two safety initiatives: the Safety Dashboard and the Agitation Roadmap.

The Safety Dashboard is a digital tool that looks at the history of a patient and their real-time behavior to give healthcare providers an understanding of whether the patient has a mild-moderate or high risk of violence. The dashboard pulls from the hospital’s safety event reporting system and will identify if the patient was involved in violent incident in the past six months. Current behavior is measured using the Acute Care Violence Assessment Tool created by the Public Services Health & Safety Association (PSHSA) – which takes into account behaviours like confusion, paranoia and verbal or physical threats to provide an overall risk rating.

“The Safety Dashboard can be launched on the desktop of any ED team member to give them situational awareness of what’s happening in the department,” says Logan. “It’s updated every 15 minutes. If a patient’s violence assessment tool rating goes up or down during their time in the ED, it’s reflected on the dashboard.”

While the Safety Dashboard supports awareness on the team, the Agitation Roadmap empowers ED team members to take action based on that awareness. It provides specific steps to help manage difficult situations and suggestions to support patients who are agitated during their stay in the ED.

“I don’t think anyone who comes into the ED is having a good day,” says Kerri. “Sometimes it’s about acknowledging that everyone who comes through those doors is not at their best – and understanding that we can do little things that can make their day better.”

Suggestions on the Agitation Roadmap include asking team members, such as such as a community support worker, mental health nurse or physician, to check-in on a patient. The patient may be feeling agitated because they need food, water, warm clothing or pain management. A patient may also receive warnings from nursing or security to ensure they know that verbal abuse and violence won’t be tolerated. If agitation continues despite warnings, a physician will be notified to support timely decision-making on the patient’s care plan.

“These initiatives are about our people being safe so they can provide the best possible care,” says Kerri. “Our patients are the reason we are working – and that includes patients who are agitated. These tools help us to think about how we can approach the situation safely and compassionately.”

Both tools launched earlier this month as part of the ED’s ‘No Violence November’ campaign for staff and physicians. The campaign includes a blitz of awareness-building on how to use the new tools and an opportunity to facilitate honest conversations about the ED team’s experiences with violence.

“For ’No Violence November’ we’re having regular safety huddles – both morning and evening to cover both shifts. We’re giving staff an opportunity to ask questions. We’re explaining the Safety Dashboard and the Agitation Roadmap to encourage uptake,” says Logan. “It’s going to take a period of sustained communication and support to really engrain these initiatives into our regular protocols in the ED.”

Logan and Kerri are quick to note that improving safety in the ED is about long-term change and will take long-term strategies.

“This is only a starting point. It’s not a one-and-done situation,” says Kerri. “This is a culture change – and that takes time. Over the last year, I’ve witnessed my colleagues have a voice and make their concerns known. It’s extremely important because change can only happen through open communication and continual improvement.”