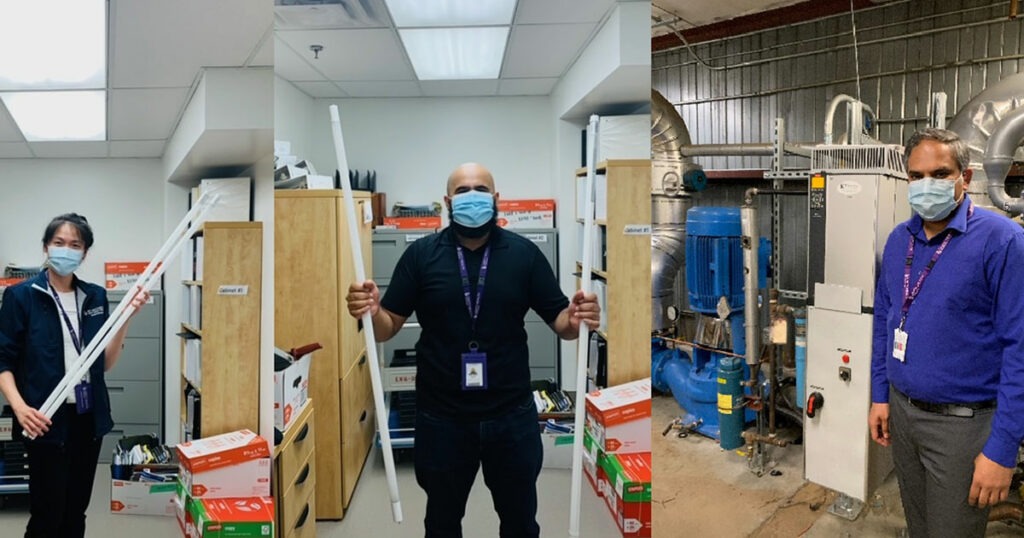 Part of the magic of energy management is that though it’s not always noticeable, the changes make a significant impact on the environment and often, cost savings.

Over the past two years, the Unity Health Energy Team has been tackling projects to make the hospital’s buildings more energy efficient through the Save on Energy Program, an energy rebate program offered through the Independent Electricity System Operator (IESO). The IESO directs the operation of the bulk electrical system in Ontario.

In its second year of this program, Unity Health has accrued more than half a million dollars through IESO projects. The second term report listed annual energy savings of 2,3 million kilowatt hour (kWh). This amount of electricity is sufficient to power about 280 homes for one year. This energy savings equates to a cost savings of $606,970, with almost $300,000 as a direct result from reduced energy consumption. The team has been approved for a third year in the program.

Since Energy Team was formed in 2019, the team have achieved accumulative saving of 4.8 million kWh energy.

“I’m very proud of our team for their accomplishments,” said Katelyn Poyntz, Director of Project Engineering and Energy.

Within the Project Engineering team, the Energy team consists of two Energy Project Managers, Emily Huang and Shailesh Abhang, and an Energy and Sustainability Project Engineer, Thanish Munas. In the past year, they have found ways to reduce energy consumption in unassuming ways, such as installing fan Variable Frequency Drives and changing light bulbs to more energy efficient options. For the current year, the Energy Team plans to install Variable Frequency Drives on fans and pumps to reduce energy consumption at St. Michael’s Hospital and St. Joseph’s Healthcare Centre.

Prior to enrolling in the program, Poyntz had already been looking into smaller projects where she could reduce energy consumption across the Unity Health sites. Applications require forward thinking and pre-planning where an organization has to submit applications several months in advance and carry out detailed calculations to demonstrate savings in order to gain pre-approval. Through the rebates offered by these programs, Poyntz was able to hire Huang as the first Energy Project Manager.

In their first year, they focused on understanding which projects would work best for the sites. Huang replaced lightbulbs to more energy efficient LED lighting across the three Unity Health sites. In total 16,000 lightbulbs were replaced, resulting in about $300,000 of energy savings.

Huang earned a Certified Energy Manager credential for the program and gained access to other benefits through Unity Health’s enrollment such as networking with other organizations participating in the program and meeting consultants available for technical support.

“I’m really passionate about energy management,” said Huang. “I think it’s really cool to make changes without people noticing it. A lot of the projects were done in the mechanical room and you don’t really notice it when you’re enjoying the buildings.”