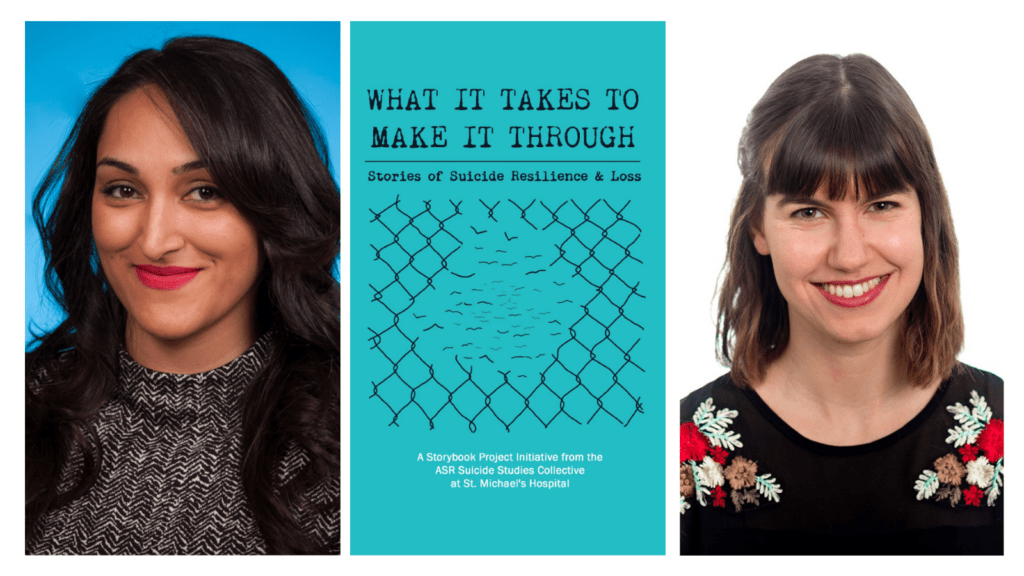 A plane ride around the world to collect the belongings of a brother who died by suicide. A phone call that makes the difference between trying to die and deciding to live. The recurring anger an anniversary of a loved one’s death drudges up each year.

Moments like these, rarely told, are captured in a collection of stories published today, on World Suicide Prevention Day, called What It Takes to Make It Through: Stories of Suicide Resilience and Loss. They were collected by Dr. Sakina Rizvi and Amanda Ceniti, two researchers at St. Michael’s Hospital who worked on this self-funded project for five years. The book includes more than two dozen stories from across Canada: poems and prose written by people who had contemplated suicide, attempted it, or are bereaved by it. They edited only to abide by the safe guidelines around suicide. Other than that, the stories are told in the authors’ own words.

“People have all these stories that are not being told. We wanted to create a space to hear some really raw experiences,” said Dr. Rizvi, a scientist at St. Michael’s and a therapist.

Dr. Rizvi was inspired to begin the project after reading about a man who shared his suicide note with a group of journalists. Reading about the actions his family members took after he died propelled Dr. Rizvi to seek out these untold stories of suicide. After that, the Arthur Sommer Rotenberg (ASR) Suicide and Depression Studies Program embarked on a mission to collect and publish stories of suicide through The Storybook Project.

“What caught me about the story I initially read was that the man’s brother flew to Japan from the U.S. to collect his brother’s things,” Dr. Rizvi said. “When you’re sitting on a plane next to someone, you never think someone’s going on a mission like that.”

The team put out a national call for anyone who had been touched by suicide to contribute a piece of writing.

As a therapist, Dr. Rizvi has the opportunity to hear many narratives impacted by depression and suicide. Receiving these pieces, she said, was different.

“When something’s written down it has a weight and a permanence that’s different,” she said. “As a therapist, when someone tells me their story it’s because we’ve built that trust. To have a perfect stranger let you in to that intimacy, there is something about that that is incredibly powerful and really inspiring in terms of the courage it took to do that.”

Ceniti, a PhD candidate at the ASR and co-lead on this project, lost a close loved one to suicide and says the project has had a personal impact.

“It’s been very helpful in my own journey, just getting a broader understanding of people’s experiences. It breaks down the barriers of working through the grief process. The more perspectives you can see from all angles, the more understanding you gain.”

Ceniti and Dr. Rizvi say they hope the main message of What It Takes to Make It Through is that no one is alone. For that reason, Ceniti and Dr. Rizvi encouraged participants to use their real names, and were inspired to see that many people did. Seeing people share without fear reduces stigma around suicide.

“Suicide is a scary topic. It’s very confusing for a lot of people to understand that someone could have thoughts of ending their life and they can’t relate to it,” Dr. Rizvi says. “I’m hoping that people, through these stories, understand that there is nothing wrong with what you feel. It is completely understandable and suicidal thoughts are a very clear extension of the really deep pain that someone is feeling. It’s my hope that people can really find the compassion for that.”

Their hope is to use the proceeds of this book, which will all flow back into the program, to fund future collections based around specific communities that have been marginalized and may have higher risks of death by suicide.

The ASR is hosting a virtual book launch today for What It Takes To Make It Through: Stories of Suicide Resilience and Loss. Register here and join them at 12:30 p.m. You can buy the book from the publisher’s website, Amazon, and Book Depository. All the proceeds from this book will go to the ASR Program to support suicide research and education initiatives.