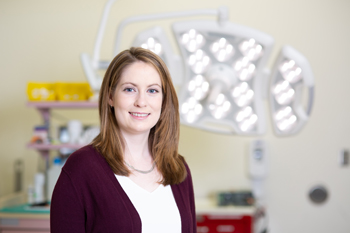 Nov. 1, 2019 – Much like the aviation industry uses flight simulators to train pilots, health care professionals can use simulation techniques for teaching and learning in a controlled, safe environment.

Unity Health Toronto recently announced the appointment of Dr. Andrew Petrosoniak in the role of clinical integration and translational simulation lead, one of the first of its kind in Canada.

In his new role, Dr. Petrosoniak, an emergency physician and trauma team leader at St. Michael’s Hospital and associate scientist at the Li Ka Shing Knowledge Institute, will be working with the simulation team to develop a program with a direct focus on improving processes and patient outcomes.

Dr. Petrosoniak and Kristen Daly, a simulation educator, shared their thoughts about the potential for this this role to transform how we leverage simulation.

Tell us about in-situ and translational simulation.

AP: Traditionally, simulation was about making teams and people better, more confident, and more adept in their practice. We now realize that health care is more than simply having a good team; it’s about working in an incredibly complex environment. In-situ simulation enables us to recreate events in the actual space where people work. It’s become a testing ground for latent safety threats, things that lie beneath the surface that might not manifest themselves on a daily basis but that, under certain circumstances, impact how we deliver care.

Translational simulation, where my focus will be, is a relatively new field. It’s less about the space where you’re doing the simulation, and more about the direct links between simulation and patient outcomes or system priorities. It’s essentially about translating learnings from the sim environment to actual patient care.

Can you give us an example of translational sim in practice?

AP: We supported a usability testing simulation for a new institutional Heparin protocol with our hematology department under the leadership of Dr. Michelle Sholzberg. Heparin is a blood thinner used to treat clotting, and while it’s commonly used, it’s finicky and requires constant patient monitoring, which was identified as a quality improvement opportunity.

Part of the issue is that it’s a computer-based protocol and algorithm within our electronic medical records. The team had designed a new protocol to overcome some identified issues so we ran some usability testing simulations with medical residents and nurses — the actual “end-users.” This is critical, since sometimes the changes we make during a committee meeting don’t work for the users in the clinical space.

In this case, we used computer workstations in a boardroom to run the teams through different case scenarios.

We used techniques like “think aloud” where users tell us what they’re doing, where they’re looking on the screens and when they can’t find items they need. We directly observe how they use the protocol and quickly determine if any deficiencies exist. Most importantly, these sessions informed further changes to the protocol before any patient care began. So here, we applied simulation as a technique to ensure the best possible protocol.

How will the translational sim role lead to better outcomes?

KD: Where Dr. Petrosoniak really shines is in how he captures and evaluates the data and learnings that arise from simulations. Back to the Heparin protocol, Dr. Petrosoniak followed up with their committee several times to check on how the feedback we gathered was translating into protocol changes. Our goal is to demonstrate, with data and evidence, how the simulation contributed to a successful implementation of the protocol.

AP: Our simulation educators work closely with the team to design the simulation exercises, ensure objectives line up and build case scenarios. My role is to provide ideas for measuring outcomes, how we’ll initiate the feedback loop, how we can think about change management strategies and how we can link the simulation directly to patient outcomes.

What’s important for clinicians interested in simulation to know?

AP: People think of simulation as “the answer” but we like to think about it as a tool or a strategy. Sim is one tool to help you meet the stated objectives. And what type of simulation you might use will vary depending on the objectives.

KD: I also want to point out how valuable it is for the simulation educators to have Dr. Petrosoniak’s physician lens.

We worked on another simulation that looked at how issues are escalated in clinical settings from front-line nurses to physicians on-call. One of the biggest successes was the opportunity to have stakeholders from Quality as well as staff physicians, residents, and nurses in the same room discussing the challenges they face on a daily basis.

We created a psychologically safe environment in this sim where front-line staff were able to openly share feedback and it was incredibly powerful. The simulation had nothing to with individual staff performances in the exercises, but everything to do with answering the question of “does this new protocol give you the tools and empowerment you need to care for patients?”

KD: One of the biggest questions we face, in an environment where funding is constrained, is to demonstrate that investing in simulation can improve patient outcomes. With Dr. Petrosoniak’s role in impact evaluations, we will now be a leader in translational simulation.

AP: More and more, we’re using simulation when designing new spaces. We watch how people work and then use it to test design prototypes before going live. Every day, we design new facilities and eventually, one patient – someone’s family member – is the first person in that space. No patient should ever be the first “test case” for a new space, just like we would never drive a car that hasn’t been crash tested.