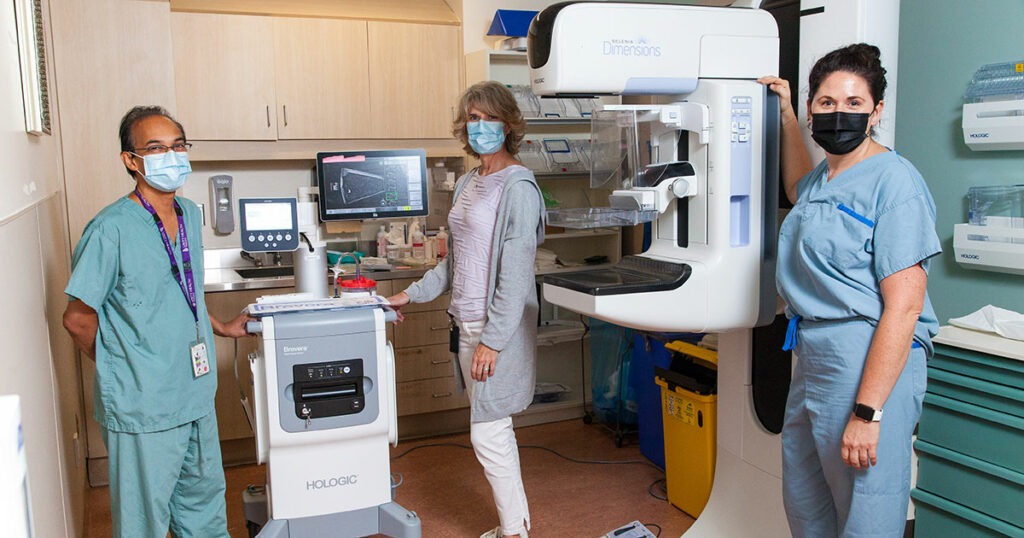 It’s no secret that mammograms are uncomfortable. To detect early signs of breast cancer, a machine firmly compresses a patient’s breast between two plastic plates to flatten and hold the breast still as the X-ray image is taken. The process is longer when the breast needs to be biopsied.

During a breast biopsy, a technologist compresses a patient’s breast in the mammogram machine, a radiologist takes a sample of breast tissue with a needle, the technologist then brings that sample into a separate room for imaging to confirm the right spot of the breast has been biopsied – all while the patient’s breast remains compressed. If the radiologist determines a greater sample is needed, more tissue must be taken from the patient to be imaged before being sent to a pathologist for testing.

Now a new system being trialed at St. Michael’s Hospital could improve the patient experience.

The Breast Imaging team has begun a six month trial of a breast biopsy system that streamlines the biopsy process. With one system, radiologists can acquire the tissue sample from the patient, image the sample as it’s being taken, verify the sample was taken from the right spot, and separate samples so they can be transferred to a pathologist with minimal handling. The system saves an average of 10 minutes per procedure, according to the manufacturer.

“The advantage of this machine is that it X-rays the biopsy specimens as soon as they are obtained from the patient so that we can potentially do less biopsy samples,” said Dr. Derek Muradali, radiologist at St. Michael’s, who led the efforts to secure the machine at St. Michael’s.

Since the imaging happens instantaneously, radiologists can know in real-time if they’ve collected adequate sample, instead of taking time to evaluate the image and going back to the patient to remove more breast tissue for testing if needed.

“What’s great about having this technology is the precision,” said Carolyn Trottier, Operations Leader of Breast Imaging at St. Michael’s. “As soon as you take a sample, you can X-ray it so we can see in real-time if we have what we need or not. The biopsy can be stopped sooner if the radiologist feels they have adequate tissues.”

The system, called the Brevera Breast Biopsy System, has an install base of over 560 units across the United States, but St. Michael’s is the first Canadian site to use the system.

Dr. Muradali estimates that over 300 breast biopsies are conducted at St. Michael’s each year.

Dr. Adena Scheer, surgical oncologist at St. Michael’s, describes looking for calcifications on an X-ray – patterns that may indicate breast cancer –like “looking for specks of dust.” Before the introduction of the new system, patients were left with their breast compressed while radiologists left the room to evaluate the X-rays for those specks of dust.

“Patients couldn’t tolerate being in the mammogram machine for the biopsy for that long of a time,” she said. “Now the biopsy will be shorter. From a patient experience perspective, this is fantastic.”